That Was The Day 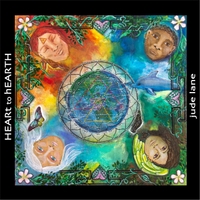 Ukha ta-tun Gaia (We All Belong)
(Jude Lane)
from album “Heart to Hearth” recorded in the Goonengerry Temple Studio,
home of Mullumbimby/Caldera fortnightly I-Group.
Originally titled “We all belong”, this track arose in response to the challenges of living communally with 10 to 15 others who all had their unique way of being. The renaming of the song occurred just prior to recording it, when the song offered an evolution of the meaning it had carried for 6 years. “We all belong” (a plea for honouring all the parts within the whole) became “we all belong to Gaia”. The phonetic ‘ukha ta-tun Gaia’ precipitated this change.